9 Bizarre Sea Creatures: From the Shallows to the Dark Depths

The 6 Most Mysterious Unsolved Murders of All Time

Adam Weishaupt: The Man Who Started the Illuminati

The Top Ten Scientific Discoveries of the Decade

Murders are always disturbing, but some are even worse than that. These killings were brutal, almost unimaginable in their depravity. The crimes horrified communities and stumped police — leaving questions that lingered for decades afterward, as years passed without an arrest or even a credible suspect.

As Netflix probes the cold case murder of a Baltimore nun in new docuseries The Keepers, TIME takes a look back at some of the most high-profile killings from the past 150 years. They vary in their details, but they all have one thing in common: a killer who has never been found.

Here are six of the most vexing murder mysteries of all time:

London’s most notorious serial killer prowled the East End over a century ago, preying on prostitutes and terrorizing the area. He made his mark as Jack the Ripper by killing and mutilating at least five women. Dread grew as the dead bodies began to pile up near each other within a three-month period in 1888. The neighborhood was “horrified to a degree bordering on panic,” when news broke of a second female victim, The Morning Post reported at the time. The local newspaper called the killing “barbarous,” and said the manner of the murder was “too horrible for description.”

Local authorities at first wondered whether the suspect was a butcher or a doctor due to his signature and gory method of murder — and his skill with a knife. The victims of the so-called “Whitechapel Murders” — Mary Ann Nichols, Annie Chapman, Elizabeth Stride, Catherine Eddowes and Mary Jane Kelly — all had their throats slashed, and most of them had their stomachs slit and organs ripped out before being dumped on the streets, according to author Dave Yost, who explores the five deaths in his book Elizabeth Stride and Jack the Ripper.

The FBI, which analyzed the case in 1988 at the behest of a movie production company, said each victim was known to be a heavy drinker and a prostitute. They were all targeted “because they were readily accessible” and were killed swiftly in the early morning hours.

Even with all eyes on the case, police were never able to put a face to the killer. The FBI said local investigations were stymied because forensic technology and other advanced means of thoroughly investigating homicides were “nonexistent” at the time. The National Archives obtained letters exchanged between different law enforcement bosses in 1888 that depict overwhelmed police departments. Charles Warren, who was the chief commissioner of the Metropolitan Police at the time, asked for help from the City of London Police. “We are inundated with suggestions and names of suspects,” Warren wrote.

Countless historians and criminologists — both amateur and professional — have speculated on the killer’s identity, but it appears Jack the Ripper took his secret to the grave.

The sight stopped a mother and her child in their tracks. A naked woman was lying feet from the sidewalk. She was sliced cleanly in half at the waist, with not one drop of blood on her. The now-infamous slaying of 22-year-old Elizabeth Short instantly captured headlines in 1947, with newspapers later dubbing her the “Black Dahlia” in part because she had dark hair and an apparent preference for black clothing.

Short, a Massachusetts native who had come to California in pursuit of fame, was bled dry before being dumped in an empty lot in a residential area of Los Angeles, authorities said. Her body appeared professionally dissected, and one breast was cut off, according to FBI records.

It’s unclear how the aspiring actor met such a grisly fate. Several dozens of people have claimed credit for the high-profile crime. The FBI, which helped local authorities investigate at the time, said it ran record checks on potential suspects and conducted interviews across the nation. However, none of the confessors appeared to be telling the truth, and the case has gone unsolved.

The murder became the subject of a 1987 novel, followed by a 2006 movie starring Josh Hartnett, Hilary Swank, Aaron Eckhart and Mia Kirshner.

The Los Angeles Police Department told TIME recently that it is still investigating the cold case, although it did not provide any details. “It’s an unsolved case,” LAPD Officer Norma Eisenman said. “There is no additional information per the detectives.”

The “Zodiac Killer” was no ordinary murderer. Rather than avoiding the spotlight, he craved media attention and seemed to enjoy taunting police with cryptic notes and clues as he left a trail of death behind him.

The Zodiac Killer murdered five people — seemingly at random — in northern California in 1968 and 1969. He claimed in letters to police that there were dozens more victims, although that was never confirmed. His deadly rampage began in December 1968, when two teenagers were shot to death in a parking lot. About seven months later, another two people were shot in a parked car, although one survived. That’s when local newspapers started getting letters from someone anonymously claiming to be responsible for the slayings, according to the San Francisco Examiner, which had received the cryptic notes.

The newspaper said the letters contained coded messages explaining the killer’s motive, as well as a key to help readers decipher his identity. “This is the Zodiac speaking,” he wrote in an August letter.

“I like killing people because it is so much fun,” he added, according to FBI records. “It is more fun than killing wild game in the forest because man is the most dangerous animal of all.”

Authorities did not crack the code revealing his name, and the Zodiac Killer went on to stab two more people in late September. One of the victims survived, and the other died. About two weeks later, the killer struck again, fatally shooting a 29-year-old taxi driver, according to the Examiner. Days later, the Zodiac mailed a piece of his latest victim’s bloody shirt to the Chronicle newspaper.

To this day, no suspects have been confirmed in the case. The San Francisco Police Department said the investigation is ongoing.

4 and 5. Rappers Tupac Shakur and the Notorious B.I.G. were gunned down 6 months apart

The music world was rocked in the late 1990s when rap superstars Tupac Shakur and the Notorious B.I.G. were gunned down about six months apart. The killings came at a moment marked by intense rivalry between their competing record labels. Both rappers were the top artists for their record companies. Many said the murders were a sign music feuds had gone too far.

Shakur was killed first, in a drive-by shooting in Las Vegas on Sept. 13, 1996. At the time, the 25-year-old superstar’s Death Row record label had been feuding with its competitor, Bad Boy. Six months later, Bad Boy’s Christopher Wallace — better known as the Notorious B.I.G., Biggie Smalls or Biggie — was killed in a similar fashion. The rapper was fatally shot in a drive-by as he was leaving a music industry party in Los Angeles.

The two superstars had been friends when both were signed under Bad Boy, according to the FBI, which investigated Biggie’s murder but closed the case in 2005. The pals grew distant after Tupac landed in jail over convictions that included rape, and Biggie rose in popularity. Tupac later switched over to Death Row.

It’s unclear whether the rivalry played a role in either killing. Both cases stumped police, in part because of uncooperative witnesses. The murder mysteries amassed their own collection of theories, including an unproven one that claims both rappers are still alive and faked their own deaths.

Family and friends of the megastars are still mourning. In March, on the 20th anniversary of Biggie’s death, Sean “Diddy” Combs paid tribute to his late friend in an Instagram video. “On this day we’re going to reflect on him because we miss him,” he said. “And 20 years later, time heals all wounds, but this one ain’t healed yet.”

6. JonBenet Ramsey was found dead in her family home 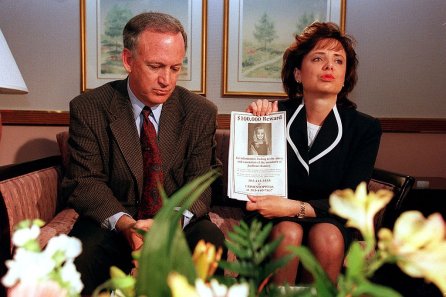 JonBenet Ramsey‘s young, smiling face stared out from newspaper front pages and television screens all across the country in the months after the 6-year-old beauty queen was found dead in the basement of her family’s Colorado home. The crime stunned the quiet and affluent neighborhood in Boulder, Colo.

JonBenet, a beauty pageant winner, had been discovered beaten and strangled, with duct tape placed on her mouth and throat, on the day after Christmas in 1996. This was already disturbing enough to draw national attention — but JonBenet’s own family quickly fell under scrutiny, and many who had followed the story began to speculate on whether her parents were somehow involved.

JonBenet’s mother, Patricia, told police she woke up early that morning to find her daughter missing. She called 911 to report a kidnapping, saying she found a nearly 3-page ransom note demanding $118,000. Hours later, JonBenet’s father, John, told police he discovered his daughter’s body in the basement. An autopsy determined that JonBenet died of asphyxiation caused by strangulation, according to the Denver Post. Her death was ruled a homicide.

The Ramseys immediately fell under a cloud of suspicion, but no one was ever charged in connection with JonBenet’s death. Her parents addressed the speculation for the first time during an interview with CNN in January. John Ramsey said the suggestion that his family was behind the crime was “nauseating beyond belief,” according to the Post. “I did not kill my daughter,” he told reporters again in May.

Twenty years later, Boulder Police said the investigation is still open, although officials declined to comment on the case. “Our goal continues to be an arrest and successful prosecution,” Boulder Police Chief Greg Testa said last fall. “We have not and will not give up.”

The recent 20th anniversary of JonBenet’s death was met with a wave of major network specials and new documentaries that explored potential suspects. JonBenet’s brother Burke Ramsey also spoke out for the first time. The 29-year-old said on Dr. Phil that he burst into tears when he first found out his sister was dead.

This Article was copied verbatim from Time

The Real ‘Beast of Belsen’? Irma Grese and...

9 Bizarre Sea Creatures: From the Shallows to...

The Real ‘Beast of Belsen’? Irma Grese and...

9 Bizarre Sea Creatures: From the Shallows to...

This Woman’s Worshipers Cut their Fingers and Tongues,...

Two Teams Played but Lightning Killed Only all...

© 2020, Apotheosis of Knowledge. All rights reserved